Well I did it, this weekend I ran my first 50km cross-country race in barefoot style. Hard to believe right now other than the fact my legs are very sore. I can't complain though, for all the time and work that went into this I am happy so many things went right. 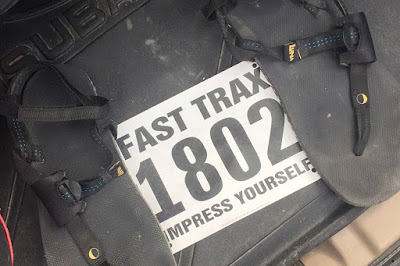 On November 25th (last year) I signed up for the BFU which was taking place on May 27th, 2017. I knew I had some time to prepare and already had a good running base from the previous year. In January I started my mileage and through most of the 21 weeks I stuck to it. In February I started having some ankle and knee issues and my friend Majo Srnik offered to put me through a gait analysis to show me what I was doing wrong. I figured I was just too busted up but after spending a few hours with Majo I soon realized that I was just pounding my body to oblivion.

Majo tuned up my technique that night and for the next few days I felt amazing and was immediately faster. However Majo also mentioned that in order to sustain long distance with a good pace I needed to start slow. So I dropped back down my pace and stayed with my MAFF level for a few months. Within weeks I was getting faster again and felt pretty effortless. Infact since Majo showed me the natural (barefoot) style I don't think I have had one bad run yet.

The next few months I started with a pair of Luna Origen sandals. Just like the Born To Run book with the Tarahumara Indians, I was going to learn to run free and natural and throw off the general hindrances that the commercial running culture seems to eat up. By May I had 200 km in my Origens and was loving it. 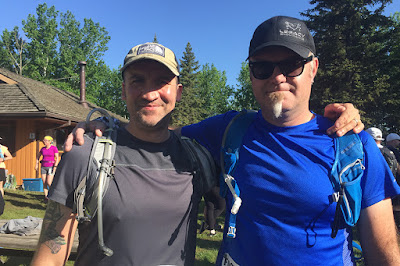 About one week to go before the race I noticed I was starting to have a little swelling in my ankles and they were getting stiff. I guess I can't be surprised as Majo suggested I get a lot more mileage in the sandals before my race but I really wanted this one to be special. I may not have had quite enough time in but I felt mostly ready and had a back up pair of trail gloves if the sandals were to harsh for the first 25km.

Race day come up quick and I thought I would be more stressed than I was. I was actually very "at peace" the days before and morning of the race. I think honestly it was because I did everything I was told, I took every piece of advice I was given and I ran every km I was supposed to before my race (750km since January 1st). I had no guilt and I had prepared all that I could.

My good buddy (and one of my longest friendships) was out to run with me so that was cool as well, to make it a special event. Tod and I started our race at 9am and spent the first couple kms just trying to get our legs and finding a good pace. It was a little hard at first, Tod was feeling strong and wanted to run fast. I don't blame him, with all the other runners and the excitement you just want to go hard. 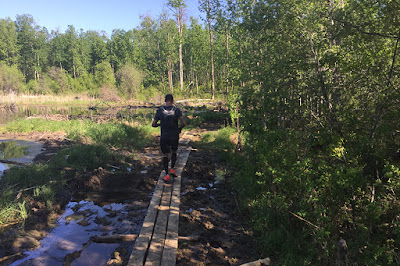 The course was nice and dry and the flooded areas were not bad at all. A few bridges had been built this year and even after Wednesdays day of storms the course was very dry. It was a hot day though so you had to just keep a decent pace and get lots of fluids at each station. I loved the stations on this course, everyone was so great, cheering us on and there was a lot of food. Tod and I both used my home-made Pinole recipe and Mas Korima for fuel. I was told to carry my own and I am glad I did. I did use some Vitargo between a few stations but it was mostly a sticky-mess, didn't mix well and was more of a pain in the ass then beneficial. So once we came in at the end of the first loop I ditched it for the Mas Korima.

At the start of the second loop I switched my sandals to Trail Gloves (Merrell) so that I wouldn't have to worry about the broken toe on my left foot (old injury) rubbing when walking uphill. While on the first loop I kept hearing Brayden Hiltz saying, "death by a thousand hills' in my head. I had received some great advice from Brayden and he had joked about the constant barrage of hills. And was he ever right. I think the total elevation gain for the two laps was about 596 meters so it was important to conserve energy on the uphills. Even Majo had said that you only make up your pace on the downhills so why run up? Gord (from Gords Running Store) had mentioned as well that, "if you can't see the top of the hill then just walk it". Good advice that worked. Not only was I trying to conserve my energy but I'd be doing it all again on the second lap. 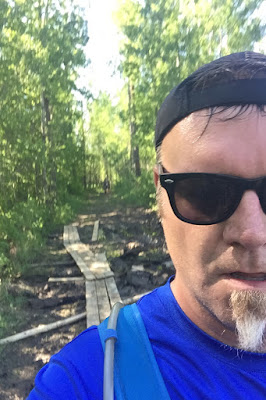 The last 5 km of the first lap Tod started having some painful cramps and spasms in his thighs so we had to slow down a bit and soon into lap two it was clear he was in too much pain to continue. With nagging injuries the last few weeks it may have just been too much. We parted ways before the first aid station and I started picking up the pace to make up some time. I was actually feeling great until km 34 when I started to heat up. The midday sun was out in force and the air pretty still at this point. The guys at the station at 36km could see that I needed a cold shower so I got the 5 gallon bucket cool-down. I can't tell you how happy I was, I felt fresh again and the next 4 km over the big open hills and course peak was very manageable.

Again at 40km I was starting to heat up and I noticed my hands had swollen up like I was wearing gloves. I could not even close my hand into a fist. I also noticed I had to pee really bad but tried a few times and nothing. I had read something about this online and wondered if I was having the issue. I was drinking a lot of water but not sure if any was going into my system. I was burning up bad and getting very dizzy at this point so started walking to clear my head. Strangely enough it was easier to run than walk but I was so dizzy that it was hard just to start running each time. I really had to dig st this point. Andy Reed (another amazing ultra runner and friend) had told me, "patience for the first 3rd, persistence for the second 3rd, and grit for the last 3rd of the race". No doubt it was all grit.

There is a point where I had this internal battle with myself. I felt like shit and just couldn't take the heat. I wanted to stop but at some point I just stepped outside of myself and made the commitment to not stop. I told myself that stopping would make everything go in reverse and the last 750 km and all the work I had done would be a total waste. If I couldn't run I'd walk fast, I wasn't going to stop for a rest.

Finally I saw the fence line for the last station and I started trotting down the hill. When I came in to the station I asked for a cold bucket shower and when the girl there dumped it on my I realized I had to sit down quickly. She told me to go to the chair in the shade while I ate a bit of fruit. A minute later I came back to the table and the medic there mentioned I did not look good. He checked me over and said I was osmotic. Basically a lack of salt was causing me to retain fluid but nothing was going into my organs (as I understand it). He told me I was done but I said I was finishing so he gave me a glass of salt water (and told me to take it easy for the next km), I grabbed some bacon and started the home-stretch. The bacon was tasty but this time I could not swallow it so I just chewed it for a few minutes before spitting it out (yeah sacrilegious I know). 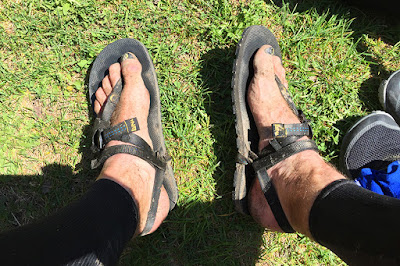 I was about 4 km from the finish, my watch had been buzzing "low battery" for the last hour and I was wondering if it was actually my own physiological warning light. "3.5 km to go" I said to myself and started to see in my mind everyone who helped me to get here (Ryan Kershaw, Majo Srnik, Andy Reed, Ryan Lees, Gord Hobbins, Brayden Hiltz, Peter Estebrooks, Michelle Barton, Jay Kinsella to name a few). I decided if I'm going to finish I'm going to finish well. So I started running again and kept it up, hearing the cheers and cowbells at the finish was such a great feeling. I knew I was done, I had a smile on my face, my wife and friends meeting me at the finish and I left everything I had on the race course. 7 hours and 29 minutes on the trail for the day and I don't have one regret. I know a few things I might do differently but overall I am very happy with my first race.

The whole time on Saturday I was thinking why would anyone spend so much time preparing to punish themselves over such long distances? What motivates someone to even try to be competitive or even try to push their own limits again and again? And would I do this again? I think those questions have now been answered. I am no longer the person I was last week, or last month. I have spent 6 months preparing to go way past my own physical boundaries to get to a place I only imagined I could. My perception of distance has changed, I have proven to myself I can manage a mental shit-storm, and at 44 years of age I can still evolve as a person and human. I am happy here, I love to run, and I want to see what I can do next.

Posted by Kurtis Kristianson at 11:47 AM