Time is no longer relevant. 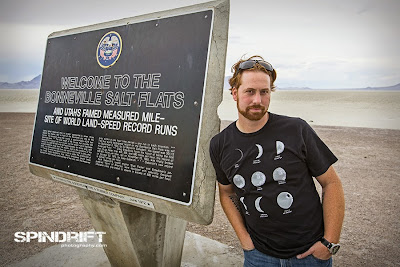 If you know who this guy is then you don't need an explanation for  his gaze in this image.

If you don't know him then what you do need to know is that this expression (captured upon our arrival at the Salt Flats in Bonneville, Aug 2013) epitomizes the character of a man I am proud to call a great friend.

This is a look that would be better to be behind than in the way. This is a look of pure perseverance, a man who is driven to produce and build something for the sole purpose that he imagined it. The distance between his imagination and reality is spanned only by a desire to understand, time is no longer relevant.

A simple idea years ago inspired by a moment, staring out over the salt flats, turned into something bigger for us who know him and are a part of it. Impossible designs, pushing the limits of engineering, personal sacrifice, A gamut of emotions, A world record, and an experience only a few can be a part of.

This expression in the image can be intense for some, but for me it means one thing....

Posted by Kurtis Kristianson at 5:18 PM No comments: