A few weeks back I was able to spend an afternoon shooting with an athlete who I have had my eye on for some time now. I have known George Boutsikakis for years from the kite-skiing community and finally got him out for a kite-sesh near Crossfield. The area close to where I live on the foothills is amazing for field kite-skiing (when there is snow) and I wanted to get George out for a test shoot and try something new with the strobes. Sometime you need a real athlete or someone who is really good at what they do so that you can achieve exactly what you are looking for.


I love working with pros, especially when they take that extra step and go hard for the camera. This day was no exception. The temps were coming up fast and we could see the snow melting in the warm chinook wind. This would be the last day the foothills would see snow from the fall and by the end of the session there was almost nothing left.

This meant that the snow was supper saturated and wet. Wet snow can cause suction under a snowboard and George kept telling me it was slowing him down. Mix that with high gusts up to 40km/hr and things start to become dangerous. Never the less as the sun dropped below the western sky, George pushed himself and blasted a few jumps over the 10 foot tree along the fence line. I realized I would have only a few frames to do this and managed to get the money-shot on the first one. What a great feeling.

Thanks again to an amazing athlete, George Boutsikakis for pushing the limits...even on a test shoot. Awesome.
Posted by Kurtis Kristianson at 10:39 AM No comments:

It has been a busy week so far with video production and a number of other things I need to get ready for spring. And even though it is not yet spring you might think differently by the weather here in central Alberta as of late. A few days of chinooks and more plus temps than minus has pretty much made all but a few traces of snow disappear. Naturally, you pull out the boats. 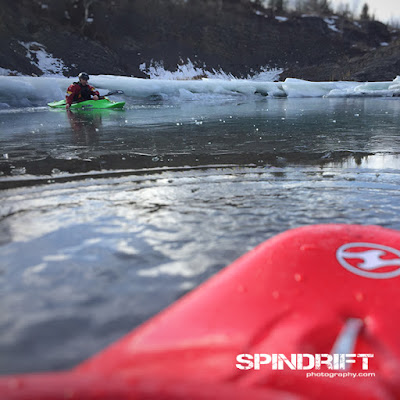 KB after his seal-launch into the ice.

Actually KB has been bugging me to get the boats out on the river for a month now but it was so warm yesterday I figured why not. The best place right now other than the Kananaskis is the Bow River down from the Ghost Dam. The water was pretty low but still easy to get down and fun in a few places. And I still get cell service down on the river so I just took photos and answered emails, great place to be the office for a few hours. 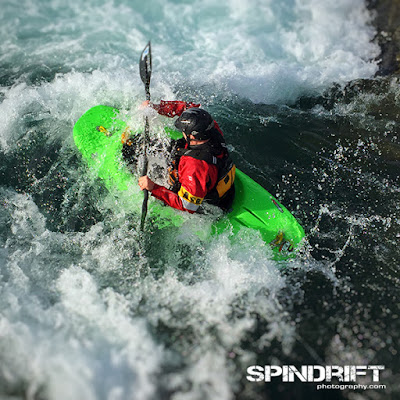 KB carves through the green tongue on the big corner.

Posted by Kurtis Kristianson at 8:26 AM No comments:

That's right, they say if you don't like the weather here just wait 5 minutes. But really if you want to get out for a paddle in the middle of winter or ski in August, you just need to work a little harder. There really is no off-season. 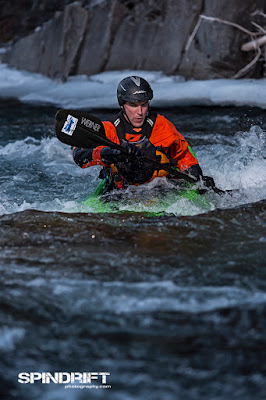 Ken Brennan stalling the bow in low-flow on the Elbow River, AB.

On January 28th a buddy and I went down to the Paddy's Flats section of the Elbow River to try out a new lighting technique. The idea was to get some winter white water kayaking in (even in low-flow) to see what we would get. Turns out I didn't have to twist Kenny's arm as he was more than excited to make a few laps and play in a small hole. 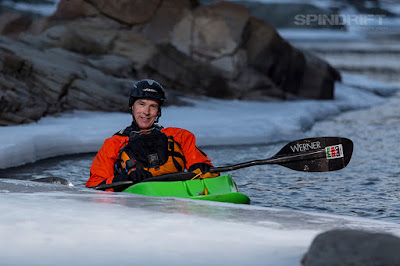 Ear to ear grin after a 2 degree session on the Elbow River, AB.

Another photographer I work with (Matt) was good enough to rush out from the city to control the 12 foot boom I built to rig up 3 speedlites on a transmitter. The whole set-up created a "street light" kind of look and I'm hoping to use this again with some other sports. As usual I had to try the editorial / adventure portrait at the end. 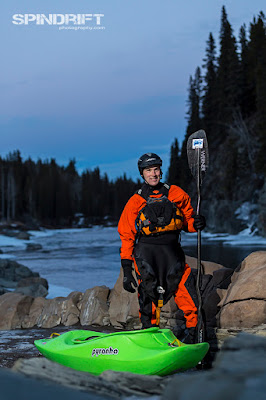 Posted by Kurtis Kristianson at 1:42 PM No comments: