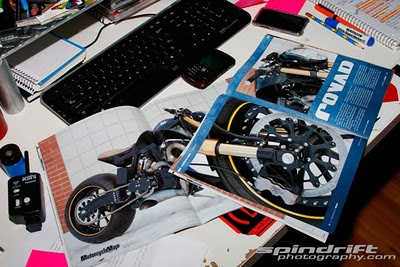 Lots of photographers work for, and get their images printed in lots of magazines. No big deal, I have been published about 20 times in the last 5 years. But I still can't help the rush I feel when I see my images printed in a magazine. This year I will be doing quite a few and the first samples from January showed up today.
It is hard to believe that when I was 12 years old, all I wanted to be was a magazine photographer. I collected hundreds of mags like FREESTYLIN" and Transworld Skateboarding. Even today I still collect several every month. Feels kind of cool that I am now doing it.
Posted by Kurtis Kristianson at 10:38 PM 1 comment: 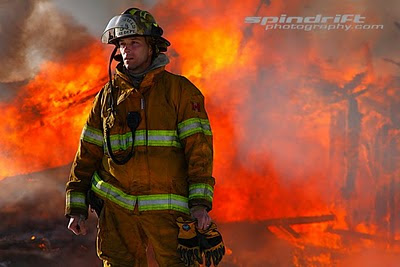 A few weeks back our firehall did some live fire training near town. At the location was a large barn that had stood for about 60 years or so. The best part about the mornings burn was the amazing blue sky in the background. The air was still and everything seemed so absolutely peaceful while this giant breathed it's last gasp and burst into a raging ball of fire. 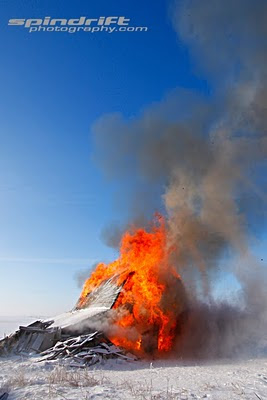 Awesome!
Posted by Kurtis Kristianson at 9:15 PM No comments:

I have spent the last three days shooting the Crossfield Baptist Church Mission Conference and it has been quite interesting. Among the different mission organisations there were two with a special connection to the church's history. Don Rendle was one of the original Pastors of the church over 30 years ago, and his son Geordon, who just finished climbing Aconcagua in Argentina (and is the Americas director for YFC).

After lunch Don asked me if I would "take a picture" of him and his son and another missionary, except they had a special request. Don wanted to have the picture taken, with him standing at the pulpit from the original church. Not such an unreasonable request except for the fact that the pulpit is now on display above the annex doorway of the church. Of course I said yes to their request but I said it had to be done on my terms, not a snapshot but a nice photograph to commemorate the occasion. I told them to finish their lunch while I set something up. 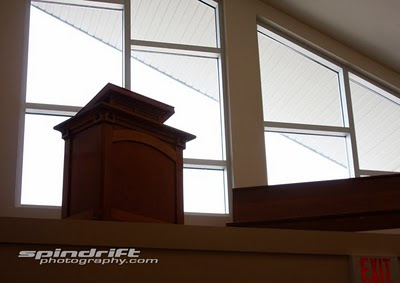 Now I have learned that it is important to always carry a small set of wireless strobes and as luck would have it, I happened to have my stands as well. Within a few minutes and the help of Chad Paulson, I had a simple strobe setup to counter the super bright light blasting through the windows. There was no room for stands on top of the annex so I improvised with a full-stop bounced off the upper ceiling to camera right and 1/2 stop bounce off the wall to camera left. This worked well even though I could not over power the window light, it actually created a softer and dramatic scene.

This makes all the difference in the world. Many people, even some pros just "take a picture". If you want to do something great, and actually "make" a picture, your going to have to make it happen. Step out of your comfort zone, tell your subjects that just a few minutes of extra setup and they will get something so much better. This is what it means to be a professional. 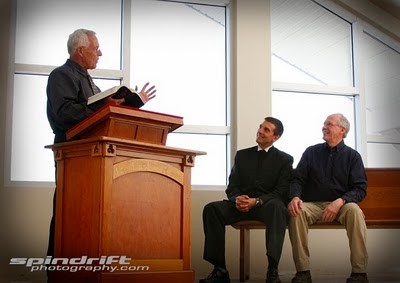 Posted by Kurtis Kristianson at 3:53 PM No comments:

Just a quick note: I just dropped of some fine-art adventure lifestyle prints at Spirit West in Calgary this afternoon as well as some large mounted 16x20 posters to go on their walls. Steve Bommer is the owner there and was cool enough to ask me to sell my work from his location. If you get a chance, go check it out.

On another note, the town of Crossfield is also selling one of my prints to commemoratethe Torch Relay through town on the 19th of January. Stop into the town office to check it out.
Posted by Kurtis Kristianson at 4:06 PM No comments: