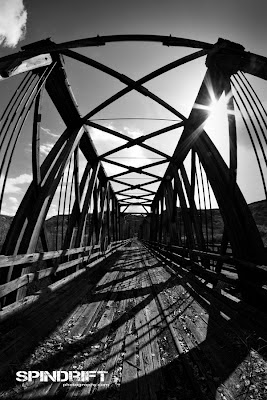 What's left of the East Coulee Bridge
Today I had one of my last group of students out East of Drumheller for what will be the first of my last two Evolution Photography workshops. Again our photographers shot some great stuff and figured the lighting out easily. I will post about that here in the next few days.

While the crew was busy being creative I threw on my fisheye lens for some fun. I didn't have to go far to find an interesting perspective. The lens is fun but this area has always been magic for me. I have been coming to these locations along the Red Deer River for 10 years now and I just can't get enough. Like the dinosaur bones that lay beneath the dirt and mud in these badlands, the old bridges and building are just a skeletal rendition of a society that moved along these parts way before my time. I always wonder, what life was like then and who these people were that lived in the valley. Just a memory that will eventually fade away.
Posted by Kurtis Kristianson at 7:58 PM No comments: 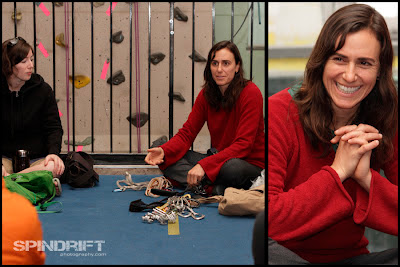 On Sunday morning I shot my last few images for the Calgary International Mountain Film Festival. I stopped down at the Stronghold in Calgary to get some action shots of world class crack climber and BASE Jumper Steph Davis. Unfortunately Steph did not get on the wall but instead chose to talk to about 20 climbers who are new to the sport about their gear and going light.

Steph is well known for going ultra-light and even to the point of using BASE Jumping for an exit point instead of just rapping off a climb. I watched her new film - "A Perfect Circle" on Saturday night which was about a few towers in Moab that she free-soloed and then Jumped from. It was a beautiful piece and the footage was great.

I was also impressed with Steph's psychology regarding risk and reward and I am beginning to suspect that with all the research I am doing on the subject, I am going to find that it is a very universal concept for every extreme-sport athlete.
Posted by Kurtis Kristianson at 11:43 AM 1 comment: 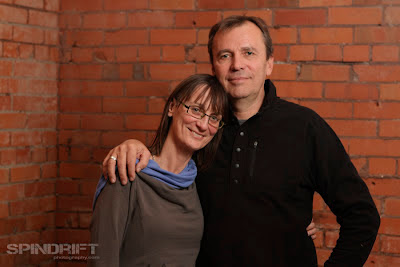 Maria Coffey and Dag Goering at their workshop during the CIMFF
On Tuesday night I was fortunate enough to sit in on a workshop at the Calgary Mountain Film Fest hosted by Maria Coffey and Dag Goering. Maria and Dag run an International Eco Tour Company and were in town to give a brief writing and photography primer.
I first heard of Maria during an interview on the CBC in about 2008 (from what I can remember) when they were talking about her book "Explorers Of The Infinite" which focuses on the spiritual and supernatural experiences of extreme athletes. This book has been a huge influence on how I view risk and pushing my limits even long before I was in the plane crash.
During Maria and Dag's workshop on Tuesday I had the chance to talk to them both in person and interact with the lessons. They are both extremely personable people and clearly passionate about telling a story whether it is through words or images. As we were wrapping up Steve Bommer (Spirit West) suggested that I should have had my camera on me for a shot of the couple for the Festival News. As any good photographer should always their gear within quick reach, I ran 3 blocks back to my van where I had left it after a long day of 6 editorial assignments for the magazine. Maria and Dag were very gracious to allow me to (very) quickly pose them with a little directional light as the location was being locked down.
If your interested in what Maria and Dag are doing, check them out at hiddenplaces.net or their Elephant project at elephantearth.org .
Posted by Kurtis Kristianson at 6:59 PM No comments: 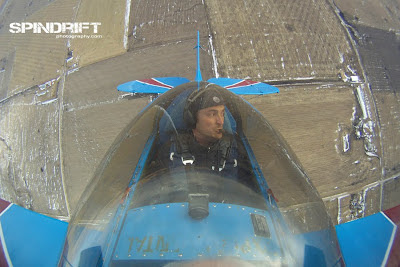 Nathan and his dad going vertical in the Skybolt
On Friday I joined a good friend of mine Nathan for a few hours of flying in his new Skybolt. I haven't been up since the crash yet and wasn't sure about how I felt about going up again so I took some time to mount a camera above the wing and get some good POV stills. 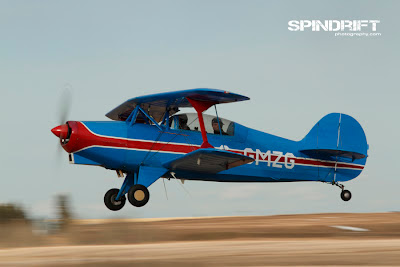 Nathan had a great time and is an excellent pilot. It is very cool to see him fly this plane and see how well it performs in various acrobatic manoeuvres. I'm looking forward to getting up. Soon...
Posted by Kurtis Kristianson at 2:49 PM No comments: