Maybe It's Not The Cold 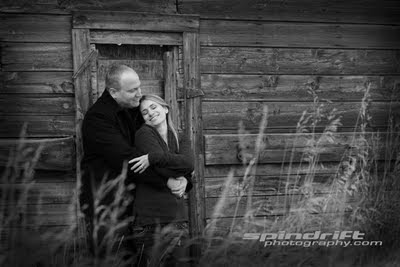 Here is another shot from last weekend. Once the couple is comfortable and focuses on each other, the camera disappears and for a fraction of a second, you can catch them at their best.
This is what makes a crappy cold day to shoot, all worth it.
Posted by Kurtis Kristianson at 7:49 PM No comments: 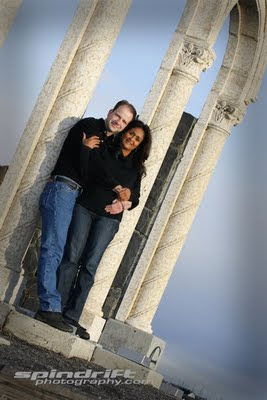 This week is all about postproduction, and finally getting to it....
Above is one of my last clients. These guys were great, it must have been 2 degrees out and they still managed to make themselves look comfortable.
Posted by Kurtis Kristianson at 7:45 PM No comments: Good clients make a bad day easier.
This weekend I had two group sessions in what I thought would be decent weather. Saturday, my clients showed up only minutes after the sun dove out of site and into the snow filled clouds. We shot anyway, had fun, and were able to get just a little bit more warmth out of their faces.
Today I had a large group of 9 and two dogs, with 15km winds it felt like -10. They were great though and as uncomfortable as it was, we ended up improvising some shots and getting good stuff.
Posted by Kurtis Kristianson at 6:15 PM No comments: 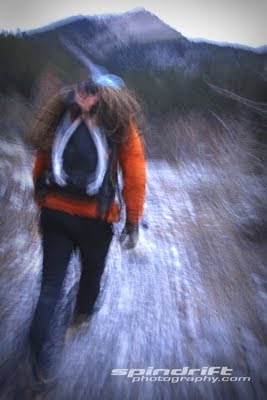 For the last ten years I have been fascinated with fear. No, really. Sure, most of the time it causes problems, is uncomfortable, and I can't wait till it passes. But really, is that all it is? Just a negative by-product of the lives we've vacuum-formed into? Mark Twight mentioned something in his Book, "Extreme Alpinism" that struck me. Fear (paraphrasing here) should be used for a positive purpose, instead of paralysing a person, they should point their energy "up" the mountain and use it to give them the strength to move.
Today did not start right. Mike and I drove out to the Bow Valley at 0600 hours expecting to climb some early season ice, but when we arrived, it was gone. Then we decided to climb some semi-trad routes at Kid Goat Bluff. Once again, that did not start right. a decision to scramble directly up to the base of our intended route caused a slightly precarious situation. Moving on to the low angle slab of rock, every step had to be sure or result in a short tumble leading into rag-dolling 500 feet down the 70 degree face.
Now here is the fear part. Generally I am comfortable moving in the mountains, as well as the vertical world, but today was different. I found myself making every sketchy step with a steadily ratcheting thought in my mind, "Do I Freak-Out Here Or Just Move On"? Strangely enough, it became nothing more than a choice, a choice that eventually lead my body to move to the next step in the equation. No perception of time, or daily stress of the plastic wrapper we live in, just click-click-move, click-click-move. The fear is there but I have stolen it's energy before it steals mine.
Maybe it can't always be this way, but at this point, I am not so sure fear is a bad thing.
Posted by Kurtis Kristianson at 4:15 PM 2 comments:

Time For A Break

Just finished a marathon week. Had 36 families last Sunday in one 40 minute sitting and 16 the weekend before. Shot 46 football players in Airdrie last Thursday, 105 hockey players on Monday, and last night had 190 hockey players in Carstairs. Looking forward to a few full-on family sessions this weekend as well.
But first, I am going to the Bow Valley to do some ice climbing on Friday and clear my mind. It's nice to be busy but I need a break....
Posted by Kurtis Kristianson at 10:11 PM No comments: 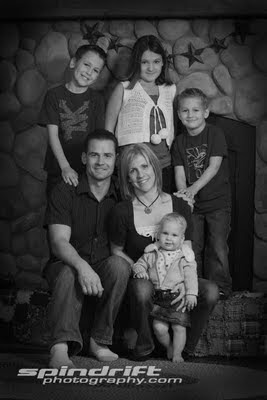 Along with moving in to the studio, I am also comfortable shooting in clients homes. In this case we had a sweet set-up. Nice oversize river stone chimney and real a country style feel. These guys were excellent to work with.
Earlier in the day I was shooting at Crossfield Baptist Church for their Family directory. It actually took longer to setup than to shoot. We did 18 families in 18 minutes, and finished one hour before our scheduled finish.
Posted by Kurtis Kristianson at 7:12 PM No comments: 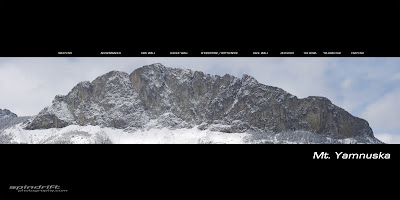 Mt. Yamnuska has got to be one of my favorite climbing areas and has some amazing history. Yam is the canadian version of Yosamite in the states and some of the worlds best climbers established themselves on the walls here. This was made from a series of images I took today from the link from Hwy 1A to Hwy 1, it is 42 inches long and when looking at the finished image, you can see detail as small as a person on it. Click on the image for a larger version.
Posted by Kurtis Kristianson at 8:24 AM No comments:

Exercise For The Body And Mind 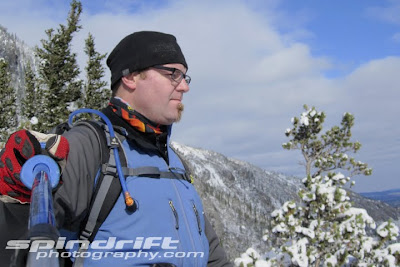 Had a few hours off today so I shot out to Exshaw and put in a quick scramble up Loder Peak. It was nice to get out and on the way down the sun came out and warmed everything up. Unfortunately a few hundred feet from the top the rock is covered with a thin layer of snow making a scramble at this time of the year, too dangerous for a solo.
Sometimes, when your at the bottom gearing up and looking at the route, it can be easy to write it off as hard, or pre-determine that it may be impossible. Sometimes you don't have the energy to even get started. But, then sometimes, it is important to just set off and treat every part of the route as a seperate problem, getting through each step, and steadily making your way, looking back once in a while to see your actually progressing. I'm not sure if it ever does get easier, but I do know for sure that once you make it, you know it was worth it.
Posted by Kurtis Kristianson at 4:35 PM No comments: 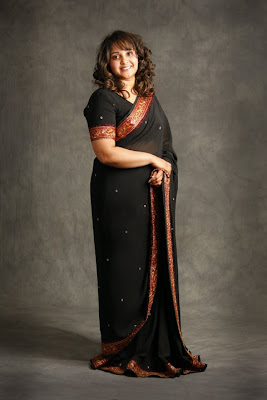 Well, the time has finally come. We are getting a ton of great sessions with awesome clients but the weather does not always co-operate. Shauna was happy with working in doors and it was fun. We were able to do a few clothing changes and backdrop changes in just a short time.
Posted by Kurtis Kristianson at 6:13 PM No comments: 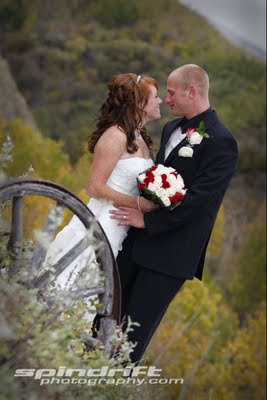 Jamie & Justin Had their big day on Saturday, it was amazing. Ceremony was great and for the first one ever in the new Baptist church, it was flawless. We had a blast with them and their wedding party even though it was about 2 degrees at our location. They all braved the cold and we worked hard to keep them as comfortable between shots as possible. Good job guys, your hard work paid off.
Posted by Kurtis Kristianson at 8:33 AM No comments: 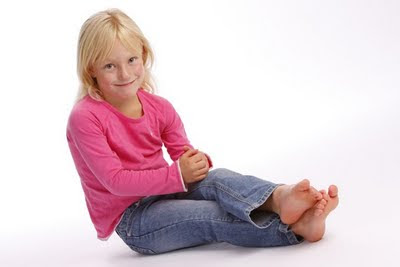 Well, here goes again. Going to try to maintain an upward curve with my creativity. Taking a challenge where I have to shoot everyday for 365 days. Today is day 2. Not every shot will be up on this blog but I will update on how it goes.

Posted by Kurtis Kristianson at 9:05 PM No comments: