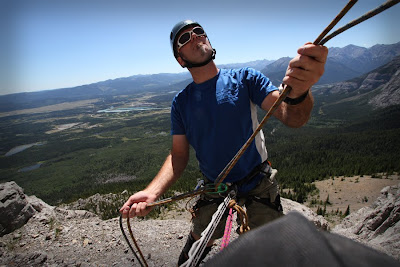 Belaying Jordan from the start of the 4th pitch.

For the last week I have been dying to get back out on some rock. Taking it easy is good for the physical but not for the mental. I have been miserable last few days and the thought of stiffening up while I sit around makes me grumpy.

This morning Jordan Ramey and I drove out to Mt Yamnuska to climb a classic route, something easy and fast would be good for today. Jordan has been on the mend as well and as ready as I thought I would be I would soon find out I am not. We needed about an hour to scramble up to the base of the route but 5 minutes in I was done, no energy at all and my left eye seemed to be building a little pressure. It took a little longer to get to the base of the rock but once I was in site I just dug down for what little energy I had.

Once at the route and somewhat rested I tied in and just scramble up the first pitch. Infact the whole climb is pretty easy but the chimney on the second pitch made us grunt just a little. It was a good lead by Jordan and the rest of the climb was pretty uneventful. We simul-climbed the 4th and 5th pitch and then I lead the greasy smooth bulge below the pumpkin. Ah yes, need to tell you about the pumpkin. 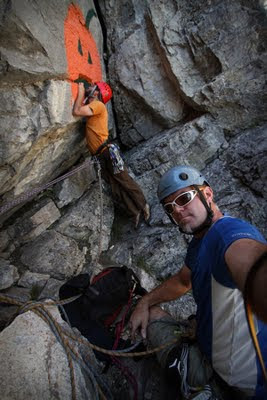 The pumpkin was painted at the top of the last pitch in 1968 and has been kept there as a tradition. This is a classic route and been on my radar for years. was cool to finally get there today. All in all I am feeling pretty good and it was nice to get out and make sure everything that is still attached to me moves like it should.

Posted by Kurtis Kristianson at 5:21 PM No comments:

Well it's been almost a week since the crash and life is almost back to (normal?) the way it was. My left eye is healing up quick and I'll be fully mobile in no time. Nathan and I will be going back up soon and at this point I have no plans slow down nor do I need to re evaluate my lifestyle. I have been hearing a lot about how the sports, business and lifestyle I lead are high-risk but I have to disagree. Whats risky for one person may certainly not be risky for me. I've heard that flying in ultra-light aircraft is risky... ...personally I think driving the Deer Foot in Calgary at 4pm is risky!

I have learned that I need to be knowledgeable and gain experience in the sports I do and to be smart about the dangers associated with these sports. I love to push my limits to learn more about myself and how I handle situations. When I come back from these situations I find that the important things in my life rise to the surface and I am much closer to the reality of living fully. I no longer waste time with things that are negative or urgent, just enjoy the people and the passions that I am blessed and fortunate to have.

The footage below is the whole hard-cut from my HEROcam during our short flight. I will be posting some thoughts and experience about the flight but I am going to take a bit of time to think about it and get a bit of rest. I watch this footage everyday and think about the crash over and over again. It seems a little bit like a dream now but there is a strong sensation I remember from the last few seconds before we hit. I can remember an overwhelming sense of acceptance of our situation and that I needed to focus on minimizing the potential damage I would be suffering. Many people ask if I was scared, I was not. I was too busy trying to stay alive. Only after we crashed and I wasn't sure how bad I was hurt was I actually concerned. It is clear now that if either of us had panicked, there would have been a much different outcome. 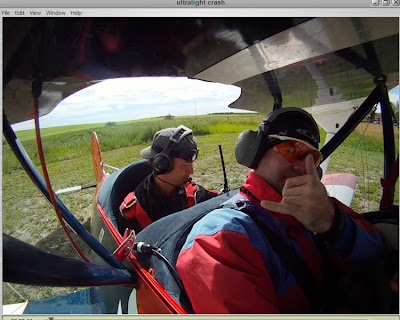 This screen grab from the footage just minutes before we crash.

If you haven't already seen the footage on the CTV website it should be up here in a day or two. Been a crazy couple of days and now time to heal up and relax. I want to Thank (Mayor)Nathan Anderson for being extremely cool under the circumstances and keeping us more than just alive through the incident. I am forever greatful for our particular outcome and there is only a handful of people I know who I would go through that with again if I had to (and might). I am looking forward to writing about it in depth and sharing as much of the experience as I can. Have a great weekend!


(From Thursday)
As many of you know now, Mayor Nathan and I were in a serious Aircraft crash this morning. We are both doing fine and happy to have walked away from it mostly intact. We had not even been off the ground for a minute before we hit a dead space of air or down draft but I was smart enough to turn my HERO cam on and I have hi-def footage of the whole incident. I will post it as soon as I can. Stay tuned.
Posted by Kurtis Kristianson at 4:52 PM 2 comments: 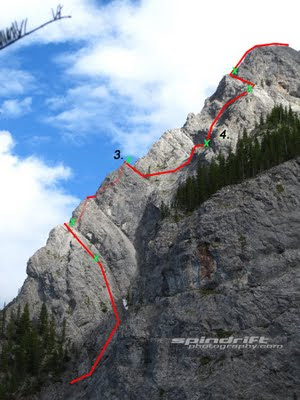 On Saturday Jordan and I finally got out to Wasootch Tower to climb the North Ridge. We have both wanted to climb this Kananaskis obscurity for some time and although the weather looked sketchy, we drove out to hit it.

We started later in the morning thinking that it is generally a shorter day climb but that isn't necessarily how it went. The approach we took was the North scree-slope as I felt it was safer than the blocky crap I had scrambled in the NW drainage a few weeks earlier. It only took an hour and we were at the treeline where it meets up with the first ramp. The first few pitches were pretty straight forward as most of the lower climb matched up with one of the only topos available on the web. Once we got to the top of what we eventually found was pitch 3, we started to wonder about the route description on this topo. Using the guide, Jordan lead across a wide gully to a small cliff band with only two meager pieces of pro (one being a fir tree - we used a lot of trees on this route). Once we were both at the 4th (what should have been the 4th) belay I decided Jordan should lead as I wasn't sure we were on route and I wanted to know where I was going before I lead another pitch. 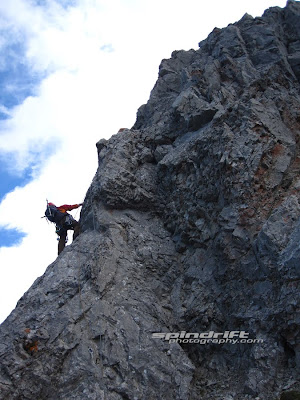 Jordan started out the 5th pitch fine but after he climbed up and out of site, his rope stopped moving and I figured I only had let out about 20 meters (not enough to get to another belay station). 30 minutes later the rope starter to play up the rock but then stopped. Then the 5 meters that had earlier gone up came back down, then 10 meters went up, then 5 meters down, then only the blue half went up... I yelled up to see if Jordan was ok and got a frustrated response. Apparently the area Jordan was in had no place to put in protection and could not find the route to a belay. 20 minutes later the blue half ran right out and I had to ask Jordan for an update and give him the news that he was out of rope length. An hour after Jordan had left the belay, I heard the best news; he yelled down that he had found the belay and was ready to bring me up. 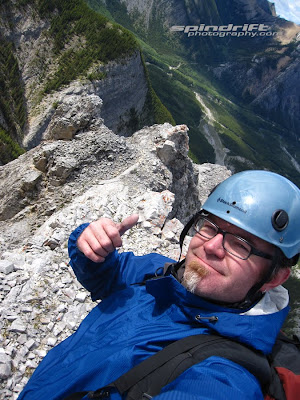 Now this might sound like the makings for a potential epic but in reality Jordan did an amazing job. The topo description is severely lacking and the route is nothing but blocky-loose crap. The perfect definition of "Rockies Choss". This section is like the Bermuda Triangle of routes and in reality you could wander around up there for hours before finding the next belay. 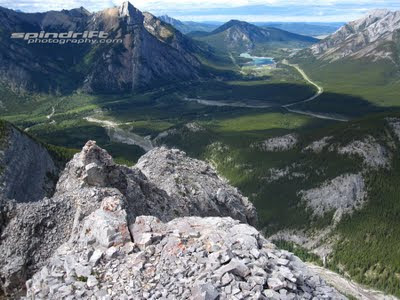 After the setback we moved back into the ridge as the clouds cleared and gave us a sunny blue (but extremely gusty) backdrop to our evening finish. The last pitch had some fun moves on it and after all that loose choss I felt like I was far more deliberate with where I placed my feet and used my hands. Over all, as shitty as the rock was on most of the route, I had an exhilarating day and would definitely climb it again. Just not anytime soon! 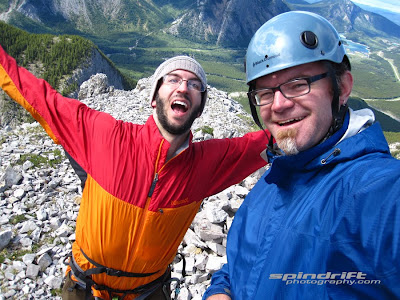 The Big One | Storm Chasing 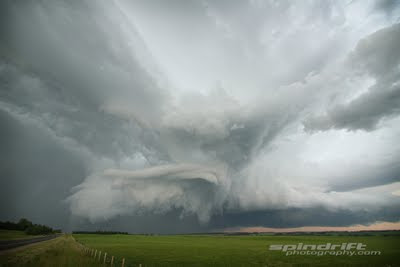 Well tonight was perfect. This thunderstorm started to develop around 11am and had warnings on it by noon. Perfect conditions. We got out later in the evening and drove north to Olds were we met with fellow storm chaser Tremaine Lea on the highway. Sounds like Joe Vonesch got pummeled by hail but he did get a shot of a small twister coming down in Sundre. I got this shot between Olds and Sundre at the very end of our chase. The patterns were amazing and if you look, they come right down within 100 feet of the ground. Awesome!
Posted by Kurtis Kristianson at 8:35 PM 2 comments:

Light Them Up | Adventure Lifestyle Photographer 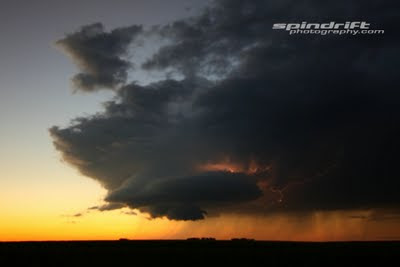 Have been busy lately and not really sure what with. There seems to be an awfully lot to do but not a lot of real work. Tonight was more of the same and was stuck downstairs in the office when I took a break and came upstairs to look at the sky. I could see this great Thunder Storm to the NW and saw one lightning strike. I had to go out to see if I could catch a strike with my new intervelometer. I think I caught a couple of good ones (unfortunately the focus went soft so these will not make it to print). Saw that plane flying around the base of the storm as well. Man I'd love to try that.
Posted by Kurtis Kristianson at 10:01 PM No comments:

Last Monday morning I met with Paul Karchut from the CBC and Meghan Ward (a lifestyle and travel writer from Banff)to give a little demo on Street Luge. I don't ride as much as I used to but still get out from time to time. This was a fun morning and I think Paul did a fantastic job with the interview. The show will be national on CBC (07:20 Calgary)on Tuesday am but the link to the new show page, blog, and audio interview are here:

Paul's video clip can also be see at this youtube link:


Thanks again to my bro Stefan Dalberg (Speed Specialists) and Paul and Meg for coming out.
Posted by Kurtis Kristianson at 4:10 PM 1 comment: