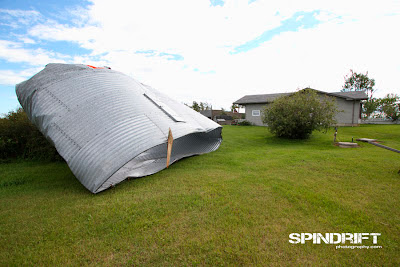 A grain bin rests 50m from its original location a day after severe weather near Bergen Rd.

Today I drove out to Bergen Rd. just North of the town of Didsbury as I had to see for myself the damage that a supposed Tornado had touched down. As I was having a look I decided that I would take pictures and geotags to see if I could build a model in Google Earth when I was done. I ended up spending a couple of hours out there and even interviewed a few of the property owners. 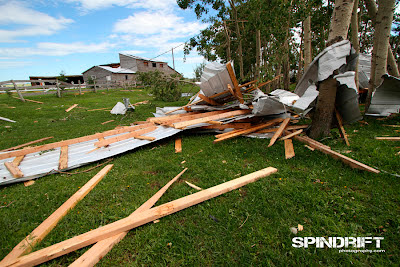 Metal and splintered wood entangle trees almost 100m from where they were part of a barn.

It is sad to see the damage done (at the personal level) but extremely interesting to get a close up and detailed look at just what power a storm of this magnitude is capable of. After gathering all of my images and geotags I was able to build a full model of the Tornado's travel and debris fields. Yes, I am calling this a Tornado for sure. There was little eye-witness but from my findings alone regarding width of touchdowns and swaths, radial debris patterns and small object missile action (plywood going through walls), I'd be willing to state (non-professional opinion) that the area briefly experienced an F1 for at least most of it's path. 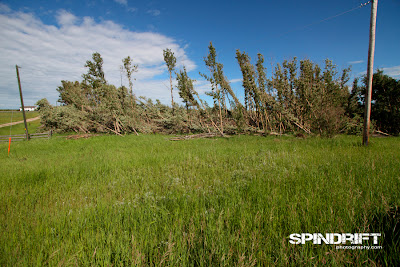 A 60sq/m tight stand of poplar trees is flattened like toothpicks just NE of the 766 and 582.

I love storm chasing and getting images of live weather is awesome, but to spend the time and inspect the damage and try to recreate the event like some forensic tv show, I have learned so much and found it fascinating. The great thing is the season is just beginning.
Posted by Kurtis Kristianson at 8:54 PM