For the last 7 years I have worked closely with one of the most interesting personalities I have ever known. I met Derek Pauletto 10 years ago when I worked as a fabricator at a shop in Calgary and we always talked about the future and all of the great things we would do when we struck out on our own. Here we are in 2012 slugging it out trying to become really successful in our own businesses now and still trying to dream while fending off the common reality of balancing security and family. 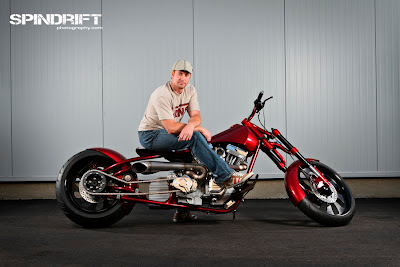 I can't pin-point the exact year but it must have been around 2002 when Derek showed me a 3" model of a concept motorcycle frame that he had come up with and intended to some day build into a ride that was like no other. I never forgot about those conversations and for the next few years kept seeing the small maquette in his tool box. Just another piece of scrap among the tools but even then it seemed to stand out among everything else.

In 2008 a good friend of ours was interested in a dedication to his brother who had passed on and the chance to build the concept bike was taken up and a bold process began.  It's a long story but one of tension between a few passionate people and the reality of the laws of physics and art. I have personally been involved in quite a few parts and some fabrication on the bike and through the evolution of it have seen my share of turmoil and passion. 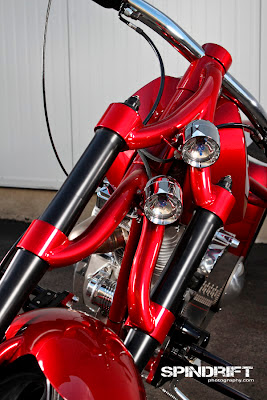 This week the bike (named the "9") received it's VIN plate and it's PDI (pre delivery inspection) so it was high-time to take some pictures and kick it's ass out the door. Like a teenager who has outstayed their welcome, it is a moment of sorrow and relief. We have spent so much time with the bike that we are ready to move on yet there is something tugging at us as it rolls out the door one last time. Could it be that through all the fussing and discipline, the choices and the desire for perfection that we subconsciously fell in love with our creation? 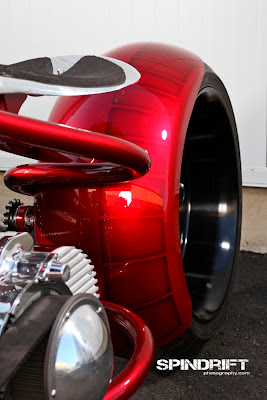 I know I speak for Derek right now when I say one thing for sure; this bike has a personality and a story. Not only a life of its own, but when I got home and looked at some of the images from tonight I couldn't help but be in awe. The 9 is beautiful. From the flowing organic chrome moly single-sided frame to the deep lustre paint surface reflecting the a-symmetrical design normally found in nature, this bike is a rolling work of art. I have had time to step back and be critical and I feel the 9 has developed some kind of maturity while I was busy focused on something else. 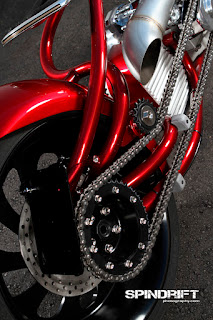 As awesome as the bike is I can't help reflecting back on one thing, the bike had it's creator. Derek is a true visionary and passionate about what he does all the while running a tough business and facing daily the challenges of protecting his independence and security of his family. Not just answering to responsibility but also alive with the ideas and dreams that punctuate our long days at the shop. Derek has followed through on a very serious idea and not only giving it wings but allowing it to be beautiful on it's own. The 9 has evolved at the interest of many but owes it's life and freedom to Derek alone. 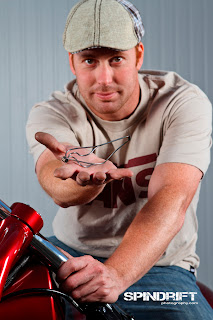 I am very proud to have been a part of this project and to share so much of Derek's world. Not many people today can say that they have followed through on such a grand idea and even fewer are willing to live with nearly as much risk. Tomorrow the 9 will be just a bike but right now it is a symbol of completion. The final chapter of a time when ideas were more important than money and dreams were fun. The creation has left home and we can be proud of all the effort we have poured into to it. So raise your glasses now and let's give a toast, to someone among us who has stayed the course and followed through on an idea that should inspire us all. Derek, your work is truly a manifestation of your passion, thank you for that.
Posted by Kurtis Kristianson at 1:25 AM