I just spent the last three days at the 2011 Calgary Motorcycle Show and what a blast it has been! It is good to be back as the show photographer (taking a break as an exhibitor)and it is so much fun shooting since this is just more of my line of work. What could be better than to cover a show centered on the motorcycle lifestyle and working with world class extreme athletes. 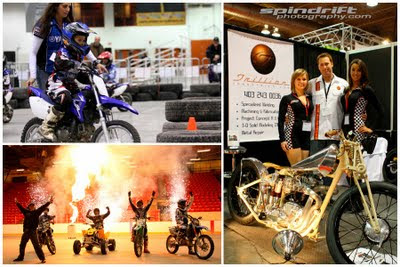 Laurie Paetz and the girls from the Canadian National Sportsman Shows have put on a sleek and solid weekend considering the temporary slow-down in the recreation industry. This years show had the Second Gear Club back with their trials riding demonstration, sharing a hall with Yamaha's Riding Academy for kids. Show stars included Biker TV's Heather Ireland, Daryl Makk, Tautu and Jordan and Amy Szoke. 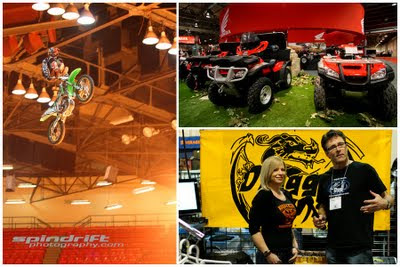 And of course, the Calgary Motorcycle Show wouldn't be complete without the Freestyle Motor cross "Motor Madness" Show put on by Performance Promotions. Once again I had the chance to work with show announcer Doug Denance and the FMX boys including Reegan Sieg, Jeff Fehr, Chris Garwasiuk, and on the ATV this year; Jon Guetter. 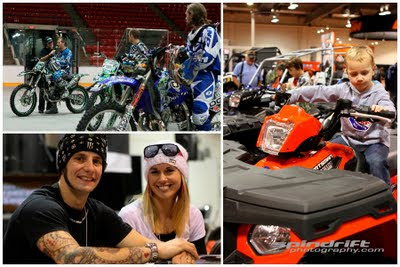 It is an exciting start to what looks like a big year for Spindrift Photography and I am very thankful to be doing this as a full time career. I want to thank Laurie for having me back to the show, Doug DeNance, Wes Turgeon, Doug Bishop for allowing me to work so close with the athletes. The security at the Corral for full access and bringing up the lights without question. My Second Shooter - Satnam Sidhu, for chasing down images and second shooting. As well as everyone else who let me put a camera in their face while they were doing what they were supposed to be doing.
Posted by Kurtis Kristianson at 7:54 PM