No Gain All Pain 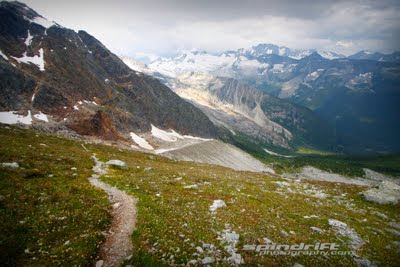 It can be a little frustrating to not complete something you had set out to do, especially when it's your body that fails you. I guess I need to be realistic though, I knew I was hurt going into this but I didn't want to jam on a new climbing partner.

While I was waiting at 7500 feet for Brad to attempt to solo the second half of the climb, I had seriously considered giving up the big mountain climbs and just stay to the front ranges. Brad eventually got blown off about a third of the way into the ridge and we headed down. I had a lot of time to think about it as we had a long way to go. We had earlier hiked a very steep trail to get to the col (saddle), which was roughly the equivalent of hiking up Kicking Horse Mtn by itself. We had cranked up 4000' feet of vertical in just 4km of trail in 2hours and 30 minutes.

By the time we were in the parking lot I had resolved that I just need to be more prepared on these demanding climbs. I was hurt because I had taken two months off from training. Being an active person is not enough for someone recovering from 10 years of chronic pain. It's work but suffering on a long trip in the back country is more than enough reason to continue to train.

Below is a view from 7500 feet where I left Brad to attempt the solo. The highway is about 500 feet below the trail you can see to the far right (middle) of the image. I have never been in this kind of an environment before, with two massive glaciers above us. There were cascading rivers everywhere, and old growth forest broken up by huge boulders left from the last retreating ice age. all you could hear was the crashing flow of melt water along every trail and stream-crossing. It was amazing, and I'll be back. I am not done yet.

Posted by Kurtis Kristianson at 9:49 AM